I / The origins of soap

It is in Gaul that we find the first receipes of soap.
“Pline the Old” (1 st century), reveals in his famous book “Natural stories”the composition of a pastry made from beech-tree ashes and also from goat fat, our ancestros used in order to color their hair in red.
For centuries, this receipe has remained same, soap being used in many ways: as an ointment, as a cosmetic, as a remedy…
It is during the Middle Ages that soap was used in order to wash clothes for the first time.
A rabian people used animal fat, but at the beginning of the VIIIth century, this ingredient was substitutedby olive-oil,which is the only one to givea plant-extractes solution, a soap with a firm consistency and a pleasant smell for numerous uses. 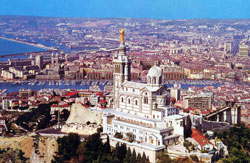 During the XIVth , the first soap maker appears in Marseilles; his name was Crescas Davin ( 1371).

III / XVth Century : The beginnings of an industry

Since the XVth Century, the local demand has became too high for the hand-made soap, and the first industrial soap factories have been created in Marseilles.
Their production was dedicated to the Isle of Rhodes, Geneva and Alexandria.

IV / XVI th Century : The first lights of an industry

During the XVIth Century, the ways of soap making are getting much more performant, thanks to the hiring of a specialists coming from all around the Mediterranean Sea and who were much more qualified than the French workforce. 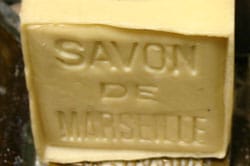 During the XVIIth Century, the soap from Marseilles has reached the fame it will never lose.
During the 30 Years’War, the best soap factories of Marseilles have developed the customers loyalty in France, but also in Amsterdam and in Hamburg.
Colbert, who saw a huge source of income through this product, asked the soap makers for a prohibitive “privilege”.
The Marquis of Seignelay created an edict in 1688 which ruled the making of the soap in Marseilles : it was forbidden to work in June, July an d August, and the only oil allowed in the making was the pure olive-oil ( without any fat addition).
This edict allowed Marseilles to be at the head of an industry which exported its products to Northern Europe, Great Britain and also to the vast Turkish Empire.

Cependant, la révolution française va stopper le commerce.
In 1709, the city prosperity was at her best, there were 30 soap factories in Marseilles.
But, the plague epidemic of 1720 closed the port and stopped the economy for a while.
In 1730, the production started again. By the time, there were two different kinds of soap: mottled soap ( used for removal of grease marks from whool, for housekeeping and also for the colonies ), and white soap, more pure and demanded by many professionals ( silk merchants, dry cleaners, launderers or perfumers).
Soap production doubled in sixty years and became the most representative industry in Marseilles economy.
Nevertheless, the French revolution was going to stop the trade again.

The importation of raw materials was stopped by the British who blocked the port.
The embargo had as a consequence the increasing of the olive-oil prices and the use of seed-oil became more systematic ( walnut, colza, flax…).
On the September 5 th 1810, a commission which had to control the making of Marseilles soap, required the factories to use a special kind of oil and to write the name and also the address of the soap factory on the seal.
The elementary hygienical notions spread out in France as in the whole Europe.
Even more, the technical progress enabled to increase the production capacity.

Soap is not only used as a detergent or as a product for personal hygiene, but also as a pharmaceutical ingredient. The famous label “extra pure oil 72%” appears.

Tweetez
Partagez
Enregistrer
Back to Top