The Making of The Genuine « Savon de Marseille »

The making of the genuine soap of Marseilles is complex and requires several steps as the soap maker‘s know-how and experience. 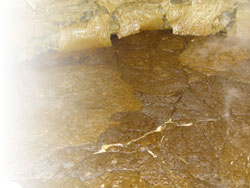 I / The soap mixture

Le savon se crée par réaction chimique , laquelle prendra huit heures . The soap maker elaborates two different kinds of soap : the white one and the green one. The white one is made with vegetable oil ( copra oil and palm oil ). The green one is made with olive oil. The soap maker has to supervise the cooking of the white soap and the green soap in two different caldrons ( each caldron can contain about 8 tons of soap ). The first step is to mix oil and alkali with sea salt. The mixing reach boiling point and the chemical reaction creates the soap mixture. This operation lasts for about eight hours . 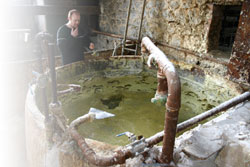 II / The cooking and the different washings

The soap mixture is brought to boil point for about four hours at 100°C. During this time, the soap maker regularly squeeze the rejected alkali. Then he sprays the top of the mixture with salt water, which, running down will carry all the impurities. The soap maker must supervise the cooking very carefully because the caldron can boil over at any time, so he stirs the mixture all the time. Then the soap maker, as a cook, has to taste the mixture; if it is sweet, the soap mixture is ready, if not, he has to continue the washing. At last, he covers the caldron for thirty-six hours. 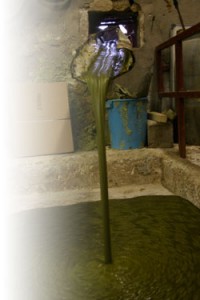 III / Powring into the basin

While the soap dries , soap makers are working downstairs.They prepare the basin which will be more or less filled, depending on the orders. Meticulously, the drains are getting settled.Theylink the bottom of the cauldron to the basins. A soap maker frees the sop which is still hot (60°c), firts slowly to see if the locations of the drainsare correct. He also sticks paper thanks to a trowel, on each of the mobile boards of each basin.It looks starngely like fusion lava . Once the soap has left the drains , it is filtered to retain the last impureties . When the basins are full, the soap maker stops the cauldron’s running faucet. He equalizes the surface of the soap which is still hot, thanks to a long – handled spatula. The soap is going to dry for about 48 hours . It is getting cold and hard slowly. 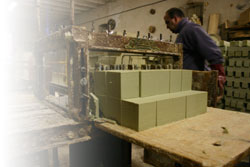 IV / The soap cutting up

At the surface of the basin, the soap is marked thanks to a special compass in order to give numerous equal rectangles , then cut into parallelepipedes. Soap makers stock the soap blocks on small boards to bring them to the cutting machine. Blocks are pushed trhrough steel threads disposed regularly in order to obtain firstly soap bars , then cubes or rectangles , depending on the orders the soap maker has to honor.

The so – obtained soap cubes or rectangles are arranged harmoniously on wood boards with some space between them.Those boards are arranged on small tired waggons , which are exposed to the air of the mistral ( the famous wind of Provence) in order to dry the soap . It is necessary to wait between ten and fifteen days to dry one centimeter – thick soap. 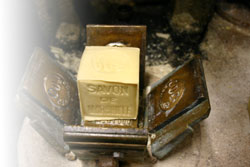 The last process is to stamp the soaps. The soap maker uses a hundred-year-old hand press.

As you can see, making genuine Marseilles soap in the respect of tradition is complex and needs a lot of different manual operations , because the style of production has to be very close to that of a cottage industry, but it’s the price to pay to have the purest and highest quality Marseilles soap. Marseilles soap is recommended by paediatricians to take care of the very fragile babies’skin and dermatologists to treat all skin diseases. But you can also use it to clean the floor or the leather, or to wash delicate material as silk or wool. And, do you know what? Some people put a piece of it in their beds to prevent cramps during the night. Thus , Marseilles soap has lot of different virtues and when you will have tried it you won’t do anymore without it.

Tweetez
Partagez
Enregistrer
Back to Top